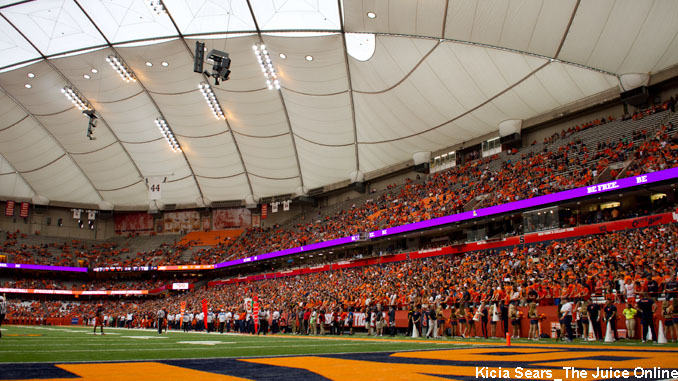 When Syracuse athletics alumni Brandon Card and Al Giocondi founded their new tech company, they had an Orange vision in mind.

The duo are part of the braintrust behind Terzo, an enterprise software platform for vendor relationship management, which just announced its launch from stealth mode earlier in August after receiving $3.2 million in seed funding earlier in the year.

“We’re a company that is going to centralize all of their vendor contracts and their vendor data in one cloud platform,” said Card, the CEO of Terzo. “That’s going to allow them to build stronger relationships, and optimize performance with those vendors in their ecosystem.”

In a nutshell, Terzo is a new software platform that allows suppliers and customers to collaborate on tasks like managing contracts, tracking goals or evaluating opportunities.

And to get the idea off the ground, both Card and Giocondi tapped into their Syracuse connections.

Card played on the football team from 2006-10. Recruited by Paul Pasqualoni, and later coached by Greg Robinson and Doug Marrone, Card experienced the highs and lows of college athletics over that time.

Giocondi, the co-founder and head of sales, played on the lacrosse team from 2008 through 2011, and continued a family tradition of lacrosse players (his father Phil played for the Orange from 1971-72). He was a member of two national championship teams, including SU’s most recent title in 2009.

The two met at Harry’s Bar and Grill in 2008 and developed a rare friendship between a members of the lacrosse and football team. The two bonded over their Italian heritage as Card’s mother and Giocondi’s father are from the same region in Italy. (The company name “Terzo” is ‘three’ in Italian, which is also an interplay with ‘third’ party vendor management.)

Card went to Oracle and later IBM after graduating from Syracuse. Once he got to IBM, he recruited Giocondi, and the two saw an opportunity in their daily work.

“It was difficult to manage the relationship with IBM because of how many solutions they offer and how broad the portfolio of services was,” Card said. “And when I went to Oracle, I heard the problem loud and clear about the need for vendor relationship management platform, and that’s how I found myself in this niche and working with very big customers.”

The two reunited in 2020 to found Terzo to tackle this issue and set a goal to raise $3 million. In normal times, that number would be a hard figure to hit. Terzo needed to show that it could land a large enterprise customer to gain traction in a rapidly expanding market.

The difficulty was only made harder by factors out of their control.

“We were doing it in a pandemic when we couldn’t meet people face-to-face,” Card said. “But we were able to win an enterprise customer.”

“We wanted to leverage our network at Syracuse because we love the background, discipline, hard work, and that winning attitude,” Card said. “We’re very fortunate to have a strong Syracuse alumni connection at Terzo, and we’re going to continue to look for great Syracuse graduates as well.”

“It was really important to work with our Syracuse network,” Giocondi said. “Syracuse for us was our most formative years of our lives. We developed certain characteristics that stick with you forever in these high performing high pressure teams.”

The two still keep tabs on their former programs.

While Syracuse football has evolved to a fast paced, open offense under Dino Babers, Card isn’t entirely sure that type of game fits the profile of SU.

“That style is very exciting and interesting, but Syracuse has always been the most successful in its pound and ground game, recruiting tough athletes in the northeast, running the football and playing good defense,” Card said. “In my humble opinion, that’s what it takes for Syracuse to be competitive in the league they’re in.”

As for the lacrosse team, Giocondi is a fan of the coaching change that took place in the offseason. Hall of Fame coach John Desko announced his retirement, and will be replaced by the legendary Gary Gait.

“I had an amazing experience being coached by Desko, and he had an amazing run,” Giocondi said. “Bringing in Gary Gait and Dave Pietramala, you couldn’t ask for a better selection going forward. I can’t wait to see how it turns out.”

As for Terzo, it’s turned out pretty well so far thanks to the Syracuse connection.

“I trust my relationships with these people,” Card said. “I’ve grown up with them throughout college and I’ve seen them grow in the workplace. I love being able to bring on people that I’ve been close to personally and have confidence in.”

Other articles from:
No items found.